This is the Planisphere FAQ for HeyWhatsThat.com. Be sure to visit the main site, whose mission is to tell you the names of the mountains you can see when you're standing almost anywhere in the world, and the general FAQ, which lists all the features HeyWhatsThat has to offer. And please sign up for our occasional email announcements.

If you're interested in the night sky, you may want to take a look at our eclipse site for simulations of lunar and solar eclipses and our Cosmic Visibility site (FAQ), which shows you your horizon and the positions of the planets right in your web browser.

Why isn't it working with my browser?

We develop and debug this site with Firefox, so the layout might be incorrect and some features may not work if you're using a different browser.

A planisphere is a circular, rotating chart that shows you the part of the night sky visible at any time through the year. This photo is of a circa 1964 product by the Anchor Optical Co. of Haddon Heights, New Jersey. 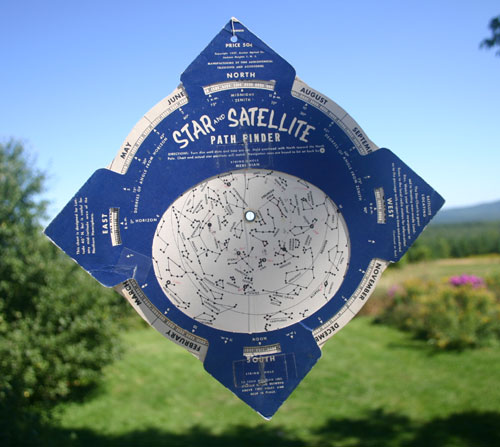 What's the connection with Google Earth?

When Google released the Sky in Google Earth functionality with version 4.2 (get latest version), there was no way to indicate what portion of the sky is visible from a given location at a given time. But because Google Earth is extensible, third parties can provide functionality. And because HeyWhatsThat.com specializes in drawing your horizon ...

When you generate a planisphere at HeyWhatsThat, you'll get a Google Earth KML file that displays an azimuth-altitude grid and the positions of the Sun, Moon and planets (and Pluto too) on the celestial sphere, for a given time and location. If you generate the KML file with a panorama, then you'll also see the actual horizon and the named summits overlaid on the sky.

How do I get one?

There are three ways for you to generate a planisphere for Google Earth at HeyWhatsThat:

Anyone can generate a planisphere assuming a flat horizon. HeyWhatsThat can go a step further. Because we've built the machinery to calculate the panorama from anywhere in the world, we can overlay that panorama on the sky. Here's the difference:

Why don't I see the true horizon?

To show the true horizon, we must first calculate the panorama for your location. Go to the New Panorama tab on our home page and enter the appropriate information. When the computation finishes, either hit the View in Google Earth at night button, or visit the planisphere page and select your panorama from the panorama that you have previously computed dropdown.

Why don't I see any planets?

We currently store position data for the Sun, Moon and planets only for 2007 to 2015. So if you specify a time earlier or later than that, you won't see any solar system objects.

When you load the animation we can't seem to reset the animation slider to a time of our choosing, so you may want to slide it all the way to the left until you understand what's going on.

A slider appears at the top right of the window when you load an animation. Hit the big arrow to the right and stuff should move. There's a cursor you can manually drag. Click on the thing that looks like a clock to the left of the slider to set options. More documentation in the Google Earth User Guide.

Each frame's start time is the moment it's actually calculated for, and its end time is the second before the next frame. Suppose you have an animation with an interval of 1 day (86400 seconds) starting July 9 at 8pm. With the animation slider all the way to the left you'll see the correct sky for July 9 at 8pm. As you slowly slide it to the right, even though the displayed time changes — July 9 10pm, July 10 4am, ... — the sky won't change until you reach July 10, 8pm. Moral: the sky we show is pulled back to the previous frame, sort of like rounding down, so don't trust the time on the slider.

The status messages appearing on the list (e.g. nighttime and visible) and the planet position data table are for the start of the animation. You may have drag the animation slider all the way to the left to make your sky match those notes. Similarly, if you double click on anything (e.g. North under Directions) the sky will spin to center your north horizon at the start time of the animation, not at the time indicated by the slider.

How accurate is this?

We currently store position data for the Sun, Moon and planets only for 2007 through 2015. If you specify a time earlier or later than that, you won't see any solar system objects. We store those positions -- right ascensions and declinations computed by NASA JPL's HORIZONS System -- at one minute intervals for the Moon and ten minute intervals for all other objects and interpolate linearly within those intervals.

We compute the topocentric position for the Moon and "Earth shadow," but use geocentric positions for all the other objects (i.e. we place the Moon in its proper place in the sky based on the observer's location on the surface of the Earth, but everything else is still shown where it would be if you were standing at the center of the Earth, because it makes so little difference). We made this change so we could accurately depict solar eclipses.

There is no attempt to incorporate the actual axial tilt of the planets' rotations.

Because we cannot change the positions of celestial objects to account for refraction — they come as images from Google's servers — we instead reduce the altitude of the grids and horizons. For example, suppose we're at standard conditions where astronomical refraction means you can see objects 34 minutes of arc below the horizon. Then a point on the horizon with altitude zero will be shown at the same spot as a star whose true altitude is -34' by lowering the horizon to -34', not by raising the star to its apparent altitude of 0°.

The planets look fuzzy when I zoom in.

Planets are initially surrounded with a circle to show you where they are. As you zoom in, these circles disappear and you'll first see low-resolution images of the planets and then high resolution versions. Those high-resolution images are fairly large and can take a while to load; to see them zoom in until the image looks a bit fuzzy and then wait for however long it takes you to download a megabyte.

We came across the approach of using real size images for the planets at barnabu.co.uk's Real Sized Planets in Google Sky.

Are the directions true or magnetic?

The cardinal direction markers (N, E, S, W) are all true bearings, not magnetic. But if you select Magnetic under the Grids heading you'll also see magnetic directions and gridlines.

How do you know where I am?

When you load the planisphere page, we estimate your location from the IP address of your computer, using GeoLite data created by MaxMind, available from http://maxmind.com/

What data do you use?

The position data for the Sun, Moon and planets is taken from the telnet service of NASA's Jet Propulsion Laboratory HORIZONS System.

Where did you get the images of the planets?

Most of the images were found by browsing the NASA Planetary Photojournal, Wikipedia, and the Wikimedia Commons. We converted to PNG, cropped the planets and made the backgrounds transparent, reduced sizes, and reduced the brightness on the Pluto original. For Moon phases we reduce the brightness of a particular range of lunar longitudes on the original full Moon image.

Here are the sites where the images can be found and credits as they appear on those pages. Uncredited images are from the NASA Jet Propulsion Lab, the NASA Marshall Space Flight Center, and the Wikimedia Commons.